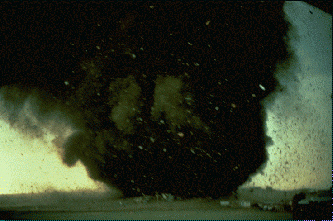 This year marks the 29th Anniversary of the most devastating tornado that hit Cheyenne Wyoming July 16th, 1979. Here is a little information on found on http://www.bangladeshtornados.org.

On July 16, 1979, the most damaging tornado in Wyoming history touched down 3 miles west-northwest of the Cheyenne airport. This strong tornado moved east or east-southeast across the northern part of Cheyenne, causing $22 million in damage and 1 fatality. 140 houses and 17 trailers were destroyed. 325 other houses were damaged. Four C-130 aircraft and National Guard equipment sustained $12 million damage. Municipal hangars and buildings suffered another $10 million damage.

I was just 4 years old when this tornado hit. We were in a direct path and got hit as such. Initially classified as an F4 ( is now officially and F3) this thing was a beast and really came out of nowhere.

As my story goes. My brother and I were playing outside most of the morning, we came in for lunch and afterwards my mother was going to go out and hang cloths. I said to mom “Don’t go outside!” she asked why. I told her she was going to get struck by lightning. (Unrelated around that time on that day, a woman in Lander WY got struck by lightning). She looked outside and the sun was shining, so she went out to hang cloths. My brother andÂ I went downstairs to watch TV as the thunder storm seemingly just showed up. The tornado Sirens went off and my mother grabbed my brother andÂ me and the puppy and we all went downstairs in the basement.

Mom thought as long as we were down there she would do some sewing. She forgot her buttons upstairs and went to go get them. I followed because I was scared even though mom told me to stay there. And that’s when I saw it….. right in our back yard. Mom grabbed me and we bolted downstairs. The power went out as it sounded like an old Steam locomotive hitting our house. I watched the dog run away up the stairs and cried for him. Things were falling off the walls and the ceiling……

When it was all over we came out of the basement and walked up the path of destruction to a neighbor’s house that only sustained a few damages.

My Dad was at work while this was happening, and he came home afterwards to find us. The power was out the phones were down, and neighbors looking for survivors wouldn’t go into what was left of our house because it was unstable. My Dad found the neighbor and asked him where his family was. The neighbor replied “I didn’t see the come out”. So Dad went into the house looking for us. Remember I said the phones were dead, well he swears this next part happened. One of the only walls left standing was the wall with the phone on it. The phone rang and it was my Aunt. Dad answered, ” Is everyone OK we just heard there was a tornado” dad said he couldn’t find his family and he had to go. He hung up the phone and picked it up again to call and it was of course dead.

He somehow got word we were safe up the street, and he met us there.Â And I don’t remember much after that ( in fact most of this was told to me ). 29 years later my Parents still live in that house; it was finally paid off last year. If anyone has any pictures of this event to shareÂ I would love to see them!!!!

Update I found this video. you can see my house at 7min 48 seconds