Well its not really the weekend, kinda of a middle of the week get away (was supposed to be anyway) with the New York Yankees in town to play the Colorado Rockies.

My lovely bride was setting us up a mid week get away /  Father’s Day present. We were to head down to Denver on Tuesday morning and check in to our hotel,  hit up the night game between New York and Colorado wake up on Wednesday do a  little car shopping, then meet the older kids for the afternoon game.

Thursday we dropped off our car at the mechanic because it was running badly, called on Monday to get a status and he said the head gasket was blown… crap, that puts us down a car, and $1800.00. so we canceled the over night stay.

None the less. I had to sew new buttons on my jersey, two were missing and I couldn’t match them so I replaced them all. did a little shopping at Wally World and took care of some stuff around the house,When Mer got off work she went did a little shopping and got her self a new shirt. we had an amazing turkey samich ( leftovers from the night before). Then we hit the road about 2:00 in the afternoon.

Traffic was ok until we got off the exit and onto 20th street, turns out we were about 20 minutes to early for the parking lot so we stayed in traffic for a bit. But when it did open we got pretty close parking.  Going into the stadium was ok, the first 10,00 fan through the gate got a beach towel so that was pretty cool. We were about 2 hours early for the game, so we watched a little bit of batting practice, got a beer then sat down at the blue moon restaurant and had some super nachos! they were pretty darn tasty I might add.

Then we went to find our seats 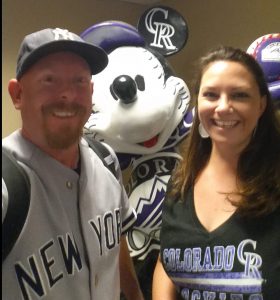 We walked around the concourse looking for our portal, we finally found the stairs that led up to the second deck. and walked through the glass doors to the upper concourse. Man was this part Fancy, I had never been up there before. All air conditioned and carpeted, bathrooms were nicer. They had lots of displays like a museum of Rockies stuff. we paused to take a selfie with Mickey Mouse decked out in Rockies gear. They had nice bars up there and several food courts. I thought, Man we need to sit up here more often. We stopped at the bar and got a couple of drinks. ( Still pricey probably even more so), then made our way down to the seats. We had a n awesome view, directly across from the pitchers mound 7 rows up. perfect foul ball territory.

The pre-game was pretty cool, they had parachuters jump from about 4500 feet up and come and land on the outfield, That was pretty darn cool, and then the choir from Gillette Wyoming High school sang the national anthem.

Rockies were having a good game, we got up about the 5th inning to get another beer and a hamburger, then we sat down and enjoyed the rest of the game, it lasted till after 11. Rockies blew a 12-3 lead in the 8th, but did end up winning 13-10. So nice to spend time with the love of my life.

The drive home was painful, we were stuck in traffic what seemed like hours, they were doing night construction and had 1-25 closed down to two lanes through Denver. We finally made it home about 1:30 and thanked our friend George for watching after our son, and then off to bed!!

Another day off and another ball game!!!! WooHoo!!

Got up around six and rummaged around the house for a bit went and feed the neighbors dogs. on the way back to the house I took a look at Mer’s flowers that are starting to bloom. The yard is starting to look pretty good. We highered true green this year to take care of our weeds a fertilizing. went over an took care of my parents house and put out the grass bucket for pickup. and then headed back home to wake up the kids and get ready.

All was going well until we tried to find everyone’s sunglasses. we actually had to drive over to the Mechanic where our car is being worked on to get a couple of pairs but all in all we got out of town some where around 10:45. Mer stayed home on this trip so it was just me and the kids ( Father’s day gift). Our oldest son’s girlfriend also joined us for the game. It was her first time at a major league game. Traffic was terrible as was the parking, we got into the stadium just after the first inning started but that’s ok it was score less. We had great seats in the second deck by the foul pole in right field. Rockies got a few runs early and help the lead for the rest of the game winning 6 to 3.

About the 4th inning we went on a food and beer run. we each had to have something different of course, the old kid needed a Philly Cheese steak, lil kid needed Nachos and a Pizza, and the old kids GF and I had New York dogs with sauerkraut and spicy mustered. Took about two innings to get this accomplished.

The game was pretty average, no real spectacular plays, couple of home runs. New York just didn’t have it in them this series.

Now…. Getting out of the parking lot was a whole nother adventure! this is the kind of traffic that you have to treat it like a 4 way stop. But no, all the stupid ass drivers get impatient and speed past all the other cars then try to nudge there way in at the front. Really pissed me off and my kids got to here Dad say a few choice words. took about an hour and half to get to the highway from the stadium what a joke.

Off to FOCO for cold stones and then back home. Got home about 8 and enjoyed the rest of the evening with the family.

Thanks kids and Mer for a wonderful fathers day gift and two days off in the middle of the week!